Another eventful month at Tanzania Christian Clinic is drawing to a close. Much progress has occurred in some areas, such as the Monduli Juu church building being nearly completed. Three years after the church purchased property, then endured numerous land disputes, the property belongs to the church and their structure now lacks only doors, windows, and benches on which to sit. Thanks to each of you who donated money to help the Tanzanian christians achieve this goal! Also we appreciate the visits, work, and contributions of Charlotte Muse in the pharmacy (1 mo.), Lewis and Tammy Short  & family (1 wk.), Mitch and Jami Ribera along with Lee and Anne Kennedy from Compassion Now Foundation, Dr. and Mrs. Ben Covington, and  3 visitors from the Neema Baby House Orphanage. 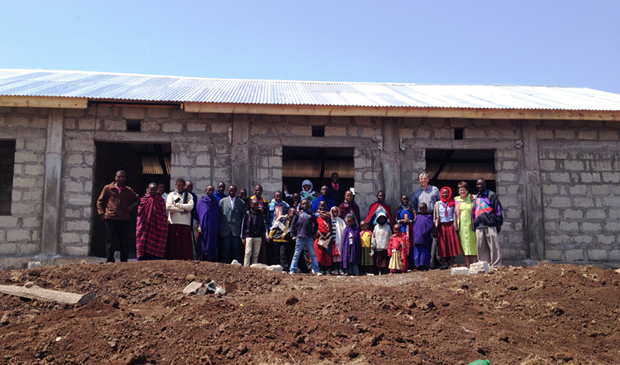 Other positives include the many Bible studies which continue, conducted by local Christians as well as ourselves. One came to be baptized on a day while we were gone from home for a few hours, but there was not enough water at our house, guest house, or clinic in which to baptize her. As the long dry season is upon us, there will be no more rain essentially until November. After several weeks and finally receiving enough water in which to baptize, we hope several will soon respond. Not only do Bible studies go on each week, but the Ngarash congregation, located right across from the clinic, has planned its own two day evangelism seminar and is inviting the village! One man with whom we are studying especially touches us: in the last two months he was released from prison after serving 10 years for poaching animals and selling the skins. How we wish each of you could hear his earnest prayers; he seems very sorry for his wrong-doing and ready to start a new life in Jesus.

Seminar in progress at Ngaresh Church

Interesting patients this month include a 50 year-old lady with severe breast cancer growing on the exterior chest wall, an emergency patient in acute pulmonary edema (fluid in the lungs) resulting from untreated, severe hypertension, and malnourished women and children for whom your donated peanut butter is a literal life-saver. But the one that wins the “patient prize” has got to be Amos, whom we told you about two years ago after he had been hit by a motorcycle while walking on the road. The injury resulted in a compound tibia/fibula fracture (bones in the lower leg protruding through the flesh), and a large, open, infected wound. Amos was admitted to a regional hospital but was discharged before having any surgical care. With an infected compound leg fracture, Amos was desperate. Lacking the funds to pay for a much needed, expensive surgical procedure, Amos asked us to help him with an amputation. Instead, intensive wound care was given at TCC over the next year.

During that time Amos was sent repeatedly with TCC’s clinical officer to a teaching hospital two hours away. After the orthopedic surgeons there advised that his wound must close first, after which surgical repair of the leg would be attempted, we continued praying and working with Amos, including giving him protein supplement (peanut butter) to speed wound healing. During this time we also studied the Bible with him and he was baptized after we wrapped his leg in numerous clean garbage bags to keep the wound dry.

Another year went by, and Amos obtained supplies to do his own dressing changes and went to visit relatives for several months. Then, early this month smiling and happy Amos reappeared in the clinic, with a limp but definitely walking!!!! Totally amazed, we realized that even without surgery his tibia and fibula had remodeled (reformed and realigned, to an extent), and would now support his weight. How we praise and thank God for His dramatic answer to your prayers and ours. No doubt, Mungu anaweza (God is able)!!!

But, as usual, all the news is not good and there are many frustrations in Africa. More stealing and lying has been discovered among some of the TCC employees, involving one Christian brother and sister, resulting in job termination for both. Please pray for us in this. To a tiny extent we understand the hurt Jesus must have felt when His “friend” Judas stole repeatedly from His and the disciples’ common purse and eventually betrayed His Master for money.

With Love and Prayers for You,