As dry as Ezekiel’s bones has been this October in Tanzania! Although TCC’s groundskeeper Enock has hauled them cut grass numerous times, our cows and goats seem to escape our pasture often in search of anything that offers extra nourishment. Lately they have enjoyed our few rose bushes, complete with thorns (the goats considering those a delicacy)!  Though many of you have dealt with Hurricane Sandy and its deluge, we are begging God to bring the rains to East Africa.

So like the ever-present “dust devils” (mini-tornadoes) that daily swirl across the dry landscape, the Tanzanian government officials have seemed to be everywhere everyday this month. First the district medical officer and his entourage came to inspect the clinic, then the immigration officials arrived to ensure that every worker, Tanzanian and foreign, had his or her current work permit. Due to officials meeting with various TCC employees we have had to spend more time working at the clinic this month and less time in home Bible studies than we would have preferred.

However, we still rejoice that three precious individuals here have given their lives to Jesus in October—two men and one woman. One of these is Moringe, a young, extremely gaunt male who heard the singing at church one day while he was sitting nearby in his sister’s house. Seeking the group that was worshiping, Moringe wandered into church and began attending Bible studies. Looking like an Auschwitz survivor, he especially touched us. Inviting him to come to TCC for health care and offering to use donor money to assist him on his first visit, we were delighted to get to know this wonderful young man who is a genuine God-seeker.  Although Moringe can afford some of his medicine, he is unable to work so you donors through TCC have several times administered insulin and oral hypoglycemic “dawa” to this severe diabetic. With his fasting blood sugars over 400, he is desperately seeking help from the TZ government to assist him in buying insulin and syringes as he cannot afford them himself. So thankful  we are that Moringe has placed himself and his future in the hands of the Great Physician. 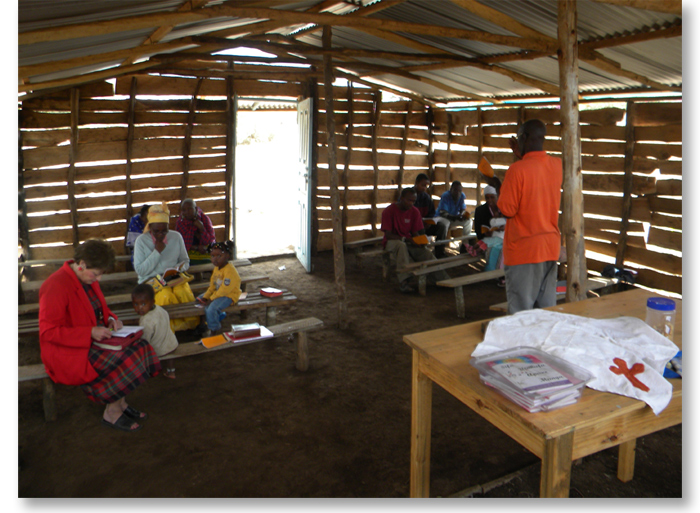 Another intriguing patient this month was an elderly Maasai “babu” (grandfather) who calmly stated that he had fought the Japanese in Burma in World War II. When Danny asked him his age, without hesitation he replied, “One hundred and thirteen years old!” Although many  Maasai are less than accurate  regarding dates and time, this man is definitely one of the oldest and brightest we’ve treated.

Besides encountering these fascinating people, another highlight this month has been attending one of the newest congregations in the area, the Ngarash Church of Christ.  Following multiple Bible studies and conversions in the area, Rick and Cynthia Nobles helped the Tanzanian Christians construct a simple wooden church building right across the road from the clinic. Sporting a dirt floor, wooden benches, and an iron roof, this congregation had 19 in attendance recently! Above you can see a picture of this small and growing group of people who lack many of the world’s goods but love the Lord just as you do.

Tunashukuru sana (We appreciate you very much),